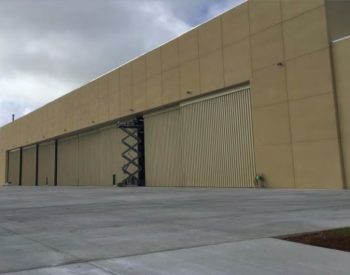 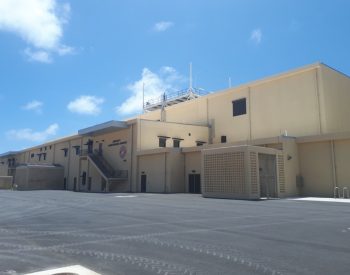 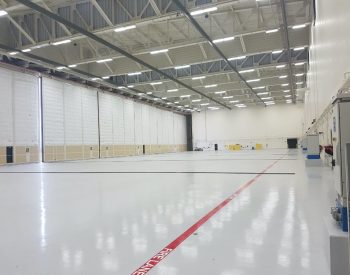 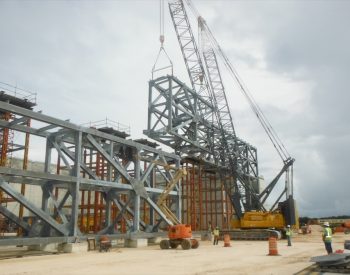 This 72,500 SF competitively awarded design-build aviation maintenance hangar features high bay spaces, crew and equipment spaces, administrative spaces, and a fire pump building. The hangar supports MV-22 aircraft and, with a minimum of renovation, is capable of supporting other aircraft, such as the KC-130J, CH-53, UH-1, and AH-1, in the future. This project includes Antiterrorism/Force Protection (AT/FP) features and complies with AT/FP regulations and physical security mitigation in accordance with DoD Minimum Antiterrorism Standards for Buildings.

The primary challenge for our team was providing an economical long span roof structure that could resist extreme seismic forces and 195 mph typhoon winds and be efficiently constructed in the remote island of Guam. BASE worked with the team to develop built-up structural steel roof trusses that support wide flange purlins and metal deck with concrete topping. The trusses span from the back wall of the hangar to a 28.5 ft.-deep steel box truss clear spanning 327 ft. over the hangar door opening. Design of the roof structure was further complicated by the fact that the approaches to addressing extremely high wind loads is often at odds with those for handling high seismic demands. For example, adding concrete topping helps resist high uplift forces, but it also increases the seismic inertial forces the building must resist. Such considerations were carefully assessed and fine-tuned throughout the design process.

In addition to being structural engineer of record, BASE also served as Special Inspector of Record and provided building code-required special inspections to confirm that construction was in conformance with approved plans and specifications. This also allowed for seamless coordination between the design and construction of the primary structure.