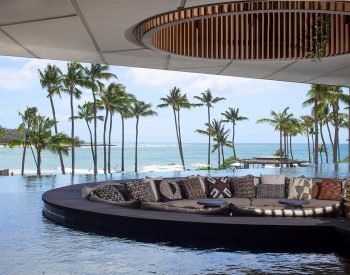 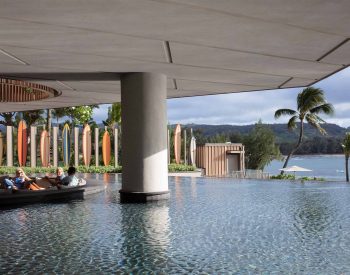 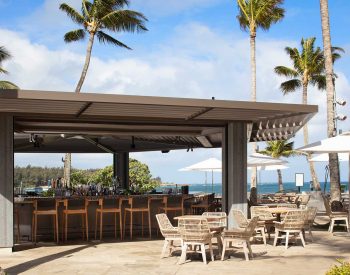 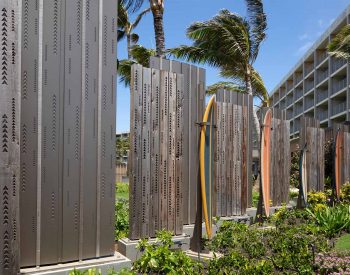 An Oahu landmark since 1973, Turtle Bay Resort was transformed to immerse its guests in the majestic beauty of the North Shore. The redesigned lobby, pool deck, and relocated porte cochere welcomes guests with a new arrival experience, and lobby walls were replaced with windows to create expansive views of the beaches and waves. The new porte cochere includes a vaulted framing system to provide a larger volume of space for natural ventilation and was upgraded to accommodate three lanes of traffic. In the lobby, additional structural steel roof framing members were added to existing steel framing, some of which were reclaimed during the demolition process and reused for the new roof layout. Additionally, the entire structural steel roof framing over the redesigned lobby space supports a natural green roof system. Adjacent to the new lobby, a new elevator core was designed to provide ADA access from the lobby area to the new pool deck.

On the lobby level, a new shallow reflecting pool delivers a front-row view of crashing waves and surfers. Just above the reflecting pool is a new oculus providing natural light. The new lobby bar features a sunken footprint with an infinity-edge water feature that seamlessly blends with the ocean beyond. BASE analyzed the existing floor framing system to determine if the sunken (recessed) lobby bar footprint could be achieved with minimal modifications. Two existing concrete beams required FRP reinforcement since their depth would be reduced by the recessed lobby bar design.

A terraced pool deck features a new adults-only pool, redesigned family-friendly pool, and a new pool bar with views to a popular surf spot. The resort celebrates the North Shore’s surf culture with the addition of the Surf House, a contemporary surf shop, and vintage surfboards adorn the property. The new pool bar layout is a hexagon when viewed in plan. The portal framing was designed out of HSS shapes that intersected at the center of the hexagon and was selected for its ease in cladding with the desired finish. Due to the tight site constraints and the necessary uplift reactions, micropiles were selected as the best foundation system for the pool bar.